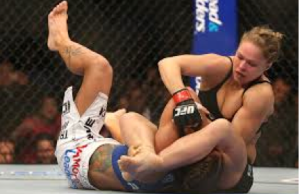 Here you have a sporting event. It’s the UFC. Highly skilled women have dedicated years to intense training. Some are State, National, World and Olympic champions in various sports. Amazing athletes!

Here is a lovely lady who is hired to walk around in a bikini to let you know what round it is. What is her outfit designed for? What are her breasts saying as she walks around and blows kisses to the audience?

Now look back at the women putting their hearts, souls and training into a world class competition…Yeah.

How about some ‘Sexy’ guys letting you know what round it is for their bro’s – elite fighters.