Here you have a sporting event. It’s the UFC. Highly skilled women have dedicated years to intense training. Some are State, National, World and Olympic champions in various sports. Amazing athletes! 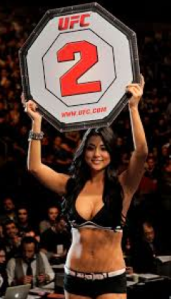 Here is a lovely lady who is hired to walk around in a bikini to let you know what round it is. What is her outfit designed for? What are her breasts saying as she walks around and blows kisses to the audience?

Now look back at the women putting their hearts, souls and training into a world class competition…Yeah.

How about some ‘Sexy’ guys letting you know what round it is for their bro’s – elite fighters. 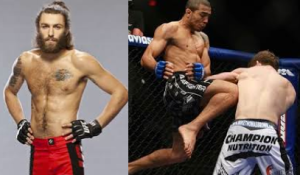 1) Yes, I know that UFC is violent and people get hurt. Sports are risky. 30% of synchronized swimmers at the national level have to leave the sport due to concussions.

2) I do not love the way it’s hyped, as if all fans are meatheads needing to be psyched for a ‘war’.

3) I competed as a gymnast and performed as a dancer. I spent six years studying martial arts. I love the endless mystery of movement.

I began studying marital arts when my son was five years old. His father lived out of the country ten months of the year and I could feel that he needed something I couldn’t give him. I chose a dojo near our home and went to watch a class. The Art was called ‘Ninpo’ which is Japanese for Ninja. Everyone wore black gis, there were no mirrors and no fake sparing, as that would train the body to pull short when in a real  situation.

As I sat and watched the students I heard the voice of my Homeopath recommending that I study Martial Arts in order to help shift nightmares I was having of being chased by killers. I joined the dojo as well. The goal of the Art was that you would never have to fight. You would develop into a person that could sense danger before it happened and leave the situation.

This Art was developed so that little people could protect themselves if accosted by bigger people. It was perfect for a woman. There is no escaping the biological reality that  a man and a woman of the same size are not equally matched.

Although I was athletic I grew up only with sisters and our fights were done with claws and verbal cruelty. I couldn’t even throw a ball. There were times in the training that I would sit quietly in the corner crying as I was overwhelmed and disoriented by all the punching going on in the class.

After about three years I did a self defense course at the dojo. The graduation is fighting, full out, a man in a padded suit who attacks you from behind when your eyes are closed. When I was grabbed an electricity snapped through my being and I fought this giant with a force so much faster and quicker that any thought could travel. I knew in my body absolutely that it is my right to fight for myself – something that my culture and upbringing had not encouraged in me.

I was training five days a week for almost six years. One Saturday after class I was lying on my back chatting with someone with my hands under my head, looking to my left. A Black Belt standing out of sight on my right quickly and playfully jumped onto my stomach. I didn’t flinch, I just kept talking but my stomach tightened naturally, he stood on me for a few seconds then got off. I realized then that I now knew what was killing intent and what wasn’t.  I could walk with a confidence that I didn’t know I didn’t have.

So the UFC is a place to experience the meeting of two equalling matched, highly trained athletes getting a chance to test themselves, to innovate, to surrender to the chaos after rigorous preparation. It’s the evolution, the innovation, the visceral grit and mental readiness  that reminds me that I am a fighter too.

And now there is a women’s division. And yes, it took the supremely talented Rhonda Rousey who is also a classical beauty to create the division. And we watch women fight. And maybe now men will start to experience woman as fierce unique competitors with bodies that have skill and not as objects here for their own judgment and pleasure. And maybe women will start to carry in their bodies a knowing about their own fierceness, their right to be clear, be heard and be safe.

Because we are the weaker sex we are encouraged to use our sexuality to manipulate  for power, for safety, for defense.  How’s that going for everyone?

And yes, we do need men to come to the aid of women but abuse of women rarely happens when other men are around. We need your change of perception not just your brawn.

In the words of Yogi Paramahansa Yogananda from his book ‘Law of Success’ –“always give one more punch”.

Hey UFC, now that there is a women’s division how about promoting the ring girls to front office jobs and having past champions carry the round numbers around the ring? Yeah, that’s what it feels like.

Wendel Meldrum is the author of ‘Pinkylux School for Girls presents ‘What is a Woman’ because it’s absurd to be one on Planet Earth’. Available on Amazon.